The Inaugural Beyond Bitumen Tour

The event director, Peter Fehon, said the small band of merry men (and women) had a great time making new friends, saw some beautiful countryside, and really embraced the fundraising activities. A total of $23,000 was raised from the event, and this bodes well for 2016 and beyond, as the event grows year by year. You can reserve a space for next year simply by emailing peter@charitycarevents.com.au and tell us you would like to participate. This will give you plenty of time to prepare your vehicle and sort out your fundraising requirements.

Most participants met up on the Thursday Night in Crookwell NSW to share a meal and a few drinks. The township of Crookwell welcomed us with open arms. The Lions Club cooked a hot breakfast for us, and the local mayor, Clr. John Shaw, flagged all the cars away at the start on Friday.

Friday morning saw us travel through some lush grazing country around Gunning, Collector and Tarago, before we headed south towards Braidwood. The rain started falling by the time we reached Braidwood so, after a quick check with the locals, we diverted around the causeway crossing of the Shoalhaven River. Three cars missed a turn on the impromptu detour, and saw a whole lot more countryside than the rest of the teams. They reported back that they were enjoying the unexpected visit to the coast and re-joined the event a couple of hours later.

The misty mountains east of Nimmatabel were enchanting and provided some great photo opportunities. From there we headed south west to Dalgety then up over the high open plains to Jindabyne.

We were met by a few extra cars on Friday night in Jindabyne, as the yarns from the day’s adventures were shared over dinner and drinks at the Lake Jindabyne Hotel.

Saturday morning saw everyone refreshed and eager for another day of dirt driving. We headed south down The Barry Way towards Victoria following the meandering Snowy River. After crossing the border we headed through SugganBuggan and then up over iconic Vic High Country to drop into Omeo for lunch. What a pretty little town Omeo is, and they even had spare parts for a 1978 Holden.

The afternoon run was north towards Corryong up over the mountain range then dropping down into the beautiful Nariel Valley with its bubbling trout streams alongside the road for several kilometres. Another night of great pub food and true stories (some were truer than others) saw everyone relaxed in this neat little town nestled at the western foothills of the great Snowy Mountains. Corryong is reportedly the home of “The Man from Snowy River” and there is an annual festival celebrating the life of Jack Riley “The Man”.

A great breakfast at the hipster café on Sunday Morning saw everyone full of caffeine and keen to move on to Jingellic and the upper reaches of the mighty Murray River. The afternoon saw the Tour head through Tumbarumba and the Bago State Forest. By this stage the forest had received 3 days of rain and the rookies in the 1978 Falcon were the first to attempt the hill past Hardy’s Mill. They were also the last to attempt the hill after getting seriously bogged. The recovery crew had a ball using their winches, snatch straps, shovels and anything else that looked like it would help. The recovery was epic, but the stories grew and have now become folklore. 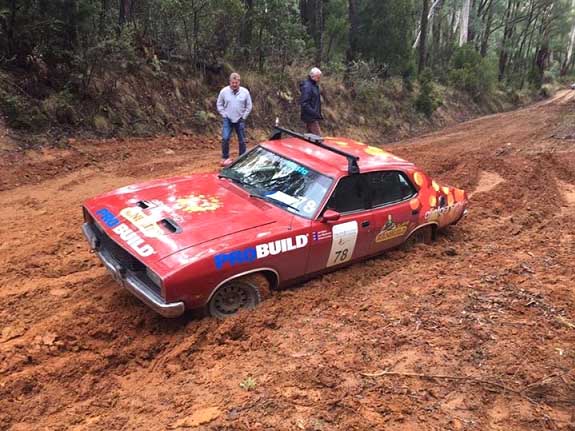 After quickly surveying a detour around the mud hole we were back on track and heading for our overnight stop in Adelong. The locals greeted us warmly and the participants were generous in support of the various Auction Items that went up for grabs. It was another big night.

With Monday morning came the realisation that the Beyond Bitumen Tour was almost over, but the trip notes suggested we had saved the best till last. We had 200 kilometres of forest roads ahead around Wee Jasper and back to Jugiong before lunch. After lunch and heartfelt farewells at the Long Track Pantry in Jugiong, it was like leaving The Whislte Stop Café in Fried Green Tomatoes as we all headed back to Sydney and various other locations.

Some comments from the participants included:

“The route was fantastic, most of it on our doorstep and country I had never seen. Truly spectacular. As usual, well organised. Love your work” Peter Cusack, Canberra.

“I have to say the driving in the Mountains is the best fun I have had even comparing to the 15 years in other trek events!” Peter Dooley, Sydney.

So, here are the dates for next year. The dates are locked in, but the route is still being finalised. We will meet on Thursday Night 10th March 2016 in a country town about 3 hours out of Sydney. From Friday morning till lunchtime Monday we will cover about 1,500 kilometres. We will arrive back in Sydney by nightfall on Monday 14th March 2016. Numbers may be limited to ensure safety, so reserve a spot now. Just email peter@charitycarevents.com.au and tell us you would like to reserve a spot (or extra spots for your mates). This will give you plenty of time to prepare your vehicle and sort out your fundraising requirements ($500 Entry Fee, plus $1,500 Minimum Donation to Beyond Blue). The event is open to any well prepared charity event car, or any 4WD vehicle.