2020 GOULBURN to TUMBARUMBA via Jindabyne, Wagga Wagga and Albury

Home 9 Past Rallies 9 2020 GOULBURN to TUMBARUMBA via Jindabyne, Wagga Wagga and Albury

The HireExpress 2020 Beyond Bitumen Rally, proudly supporting Beyond Blue, was due to take place in March 2020. Because the Rally had grown so big, the plan was to rerun it in May for a second, smaller group of participants. Well, the COVID pandemic sure upset our plans, and we had to postpone the rallies until late 2020. Eventually we were able to run the event twice in November 2020.

We were unsure how much money we would raise this year, as nearly everyone in Australia had generously supported the various bushfire appeals earlier in the year. Many of our participants were heavily affected by the Covid shutdown and some just couldn’t make it to the event. The final fundraising tally exceeded $300,000 for the year.

Everyone met up on the Thursday Night in Goulburn NSW to share a meal and meet up with their rallying mates. 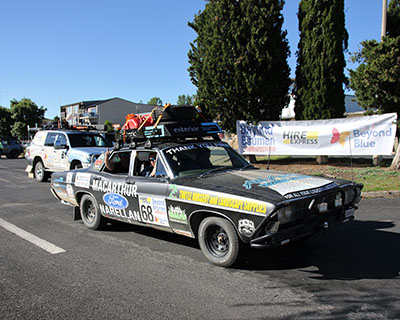 Friday morning was a low key start compared to previous years, as social distancing was still in force. We headed to Braidwood for a delicious packed lunch in the park. We made a sizable donation to Braidwood CWA to thank them for the great lunch they provided.

After lunch it was back onto dirt roads that took us to Nimmitabel and Dalgety, before arriving at our overnight stop in Jindabyne.

Saturday morning was also a pretty relaxed start, everyone seemed happy to stop and chat more than normal this year. Lunch was in Canberra after travelling 230kms, mostly on dirt roads, to Canberra via Namadgi National Park.

After lunch we tackled the Brindabella ranges to Tumut, before we headed to Wagga Wagga via Adelong. 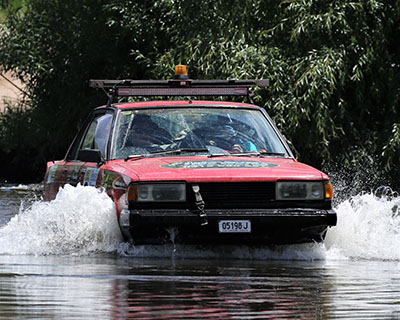 Sunday Morning took us north to Coolamon, and its historic main street shops. Lunch was at Narrandera before criss-crossing the recently harvested Canola Fields to Lockhart and on to the quaint Lutheran influenced town of Walla Walla. The Ettamogah Pub proved a popular finishing point on Sunday afternoon, before everybody headed into Albury for a well-earned rest.

Monday morning saw everyone keen to complete the course before heading back to the real world. The road to Jingellic was voted the “best of the best” by several participants. We finished at Tumbarumba Mens Shed, where they were busily restoring a railway carriage to be a museum piece for the newly opened Tumbarumba-Rosewood Rail Trail.