2019 YASS to COWRA via West Wyalong, Hay and Wagga Wagga

Home 9 Past Rallies 9 2019 YASS to COWRA via West Wyalong, Hay and Wagga Wagga
The HireExpress 2019 Beyond Bitumen Rally, proudly supporting Beyond Blue, took place over 4 days in March 2019. This is the fifth year we have run the event to help Beyond Blue achieve a greater awareness of depression, anxiety and suicide in our society.

Everyone met up on the Thursday Night in Yass NSW to share a meal and a few drinks at the Yass Soldiers Club. Friday morning saw us gather at the historic Cooma Cottage for a great breakfast prepared by the local Rotary Club. The early rain did not upset us, and it put a smile on the local’s faces. We headed to Wee Jasper along both public and private roads before zigzagging our way to Cootamundra for lunch. We made a $4,400 donation to Cootamundra Public School P&C to thank them for the great lunch they provided. The kids loved getting up close and personal with some of our more interesting cars.

After lunch it was back onto dirt roads that took us to our overnight stop at West Wyalong. The heavens opened up overnight and left a lot of water laying around the next morning. 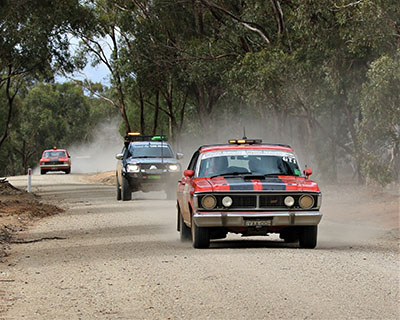 Saturday morning saw everyone into the cars ready for a big day, as we needed to cover 500kms of mostly dirt roads. We headed to Weethalle to check out their painted silos then turned north towards Lake Cargelligo for lunch. The first 20 cars made it through the mud, but the last 70 had to take a detour back to the blacktop. Once again, country hospitality and the local P&C were a winning combination, and resulted in another $4,400 donation to the local community.

The afternoon run from Lake Cargelligo took us to Hillston, before we headed to Hay. There was another big event on in Hay the night we were there, so beds were hard to come by. Lucky all 220 of our mob had booked well in advance. 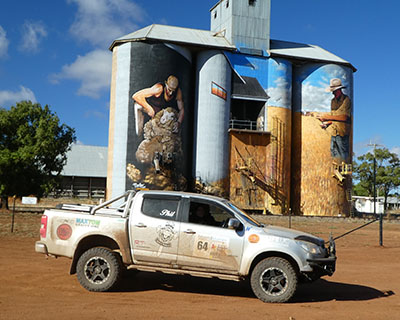 Sunday Morning took us south to Jerilderie, what a pretty little town it is! St Joseph’s P&C excelled at country hospitality and were ecstatic to receive the $4,400 donation we made. The afternoon saw the rally head east to Wagga Wagga for our Awards Dinner and Charity Auction.

Monday morning was a leisurely start with breakfast at the Murrumbidgee Turf Club. We even had WIN TV come to do some interviews that were aired on the Wagga News that evening. We headed bush again and took all the country roads that pointed north. A local farmer put on Devonshire Tea for us on his front verandah at Young, before we did the final leg to Cowra.